Mission for the children of Bodhgaya – North India

– Taking care of the children at the Shanti India school

For several years, Marc van Espenhoudt, a therapeutic shiatsu practitioner based in Brussels, has been sponsoring an Indian child from the Shanti India school in Bodghaya. He had the great idea to go and meet this school for a Humanitarian Shiatsu mission, in order to create even stronger links with this community.

Marie Cruysmans: Marc, could you introduce yourself in a few words and tell us how Shiatsu came into your life?

Marc van Espenhoudt: As a hyperactive person, I was always looking for tools to channel this excess of energy. I was lucky to know the Buddhist centre “Karma-Kagyu” in Brussels, where I followed the teachings for several years. A little later, I started practising Aikido and it is thanks to one of my former teachers, Stéphane Crommelynck, who himself organised introductory courses in Shiatsu, that I got to know this practice. It was a revelation for me.

Afterwards, I followed a three-year training course at the European School of Massage in Brussels. There I met Ivan Bel and Fabian Bastianelli, incredible and passionate teachers who passed on this passion to me. I continued my training with a fourth year in therapeutic Shiatsu with Ivan Bel at the Ryoho Shiatsu school. During my years of study, I met Bernard Bouheret in Brussels. They were so captivating and generous that some students of the Ryoho Shiatsu school and I decided to follow an additional year at the School of Therapeutic Shiatsu in Paris. I thank all three of them for having given me the desire to continue on this path. 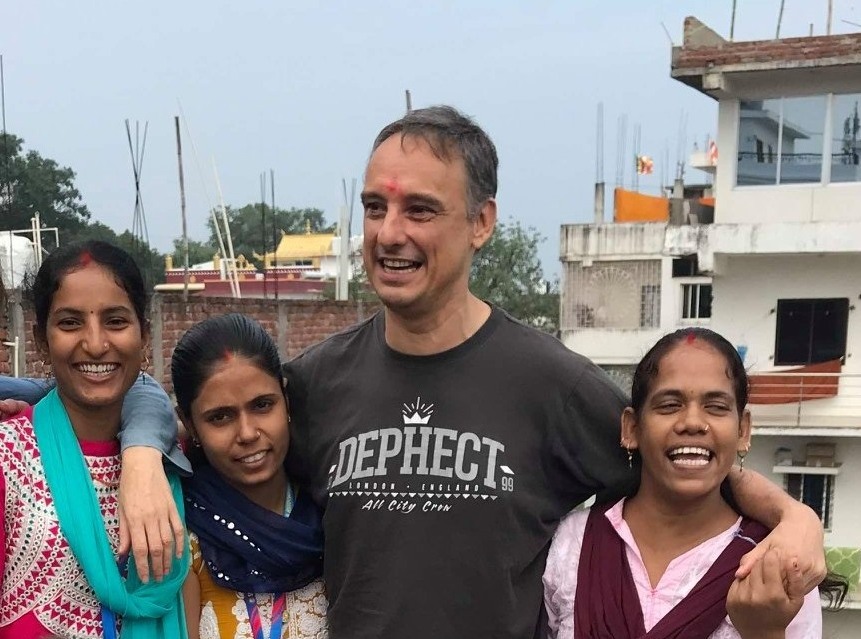 How did the idea of this humanitarian Shiatsu mission in India come about? Can you tell us how this project came about and then became a reality?

In 2019, friends and I have been sponsoring Jitendra and his little brother Deepack, two Indian children who attend the Shanti India School in Bodghaya, for a few years now. Several of us supported this school, their fantastic project and some of the children. My friends had already been there, but I had only seen them via Skype. During my last year, Ivan Bel told us about a Shiatsu mission in Rwanda, and that’s when the idea of setting up this Shiatsu mission came up, which would allow me to meet our godchildren and those who participate in their daily wellbeing, while at the same time spreading Shiatsu beyond our borders. As soon as the idea was born, everything aligned quite easily: I contacted the Shanti India school, which welcomed this project with enthusiasm, and in October 2019, I flew with three friends and colleagues from Shiatsu for a 15-day mission in Bodghaya. 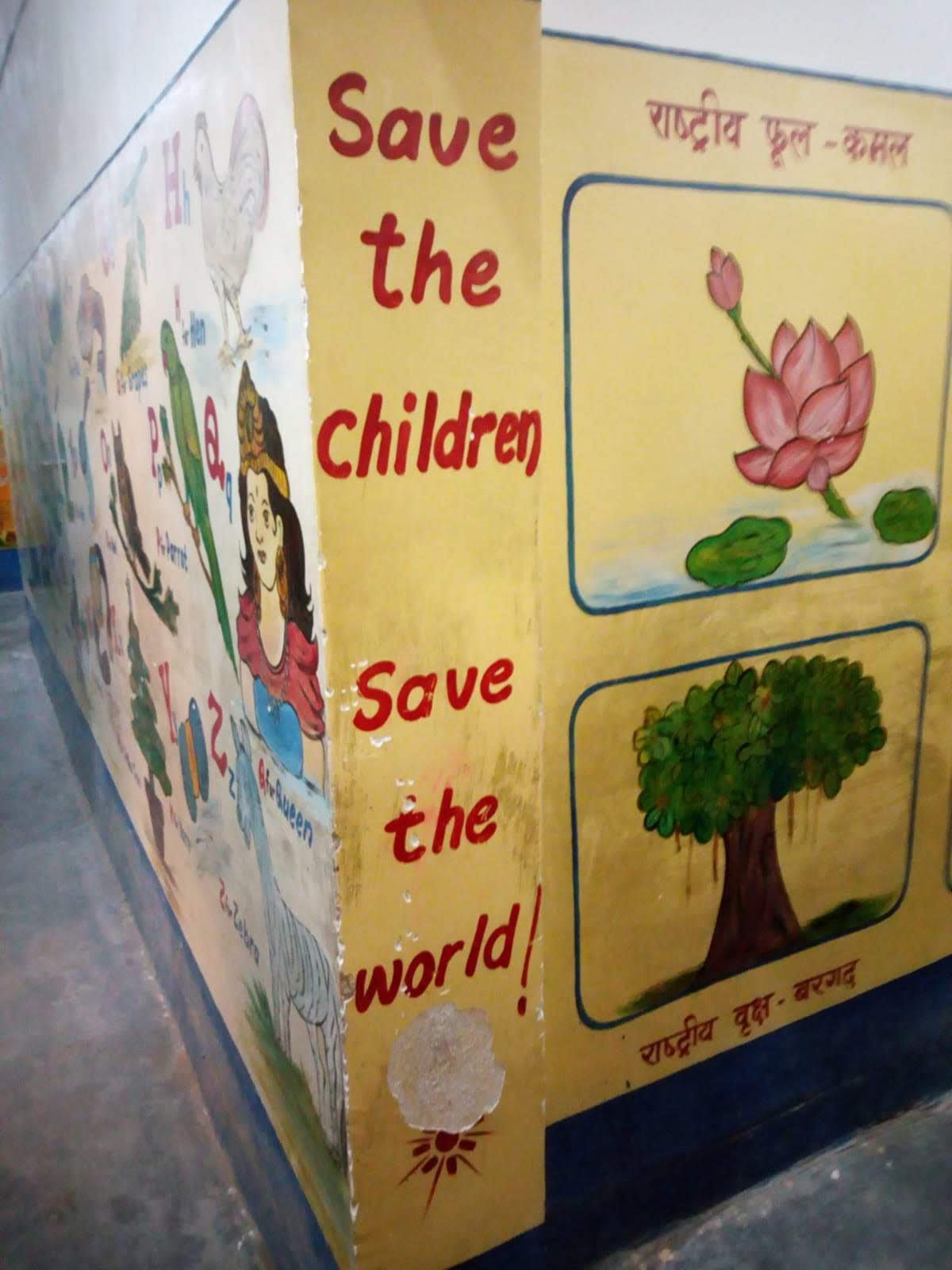 Can you tell us a little more about the Shanti India school and its project?

The Shanti India School was founded in 2005 in Bodhgaya, in the state of Bihar, in the North-East of India. It was born from the dream of Dominique Valli, a French woman who came to India to follow the teachings of Buddhism. Seeing the misery and poverty that surrounded her, she decided to act out of compassion and spent her personal savings to set up this school for underprivileged children.
Since then, she has ensured that the quality of education provided to them is of the highest possible standard, and has raised funds to secure the school financially.
Shanti India School now provides 480 children from poor families with a free, full-time education and helps them pursue their dreams. Children and students at Shanti India learn ethical codes of conduct based on solidarity, compassion and kindness. 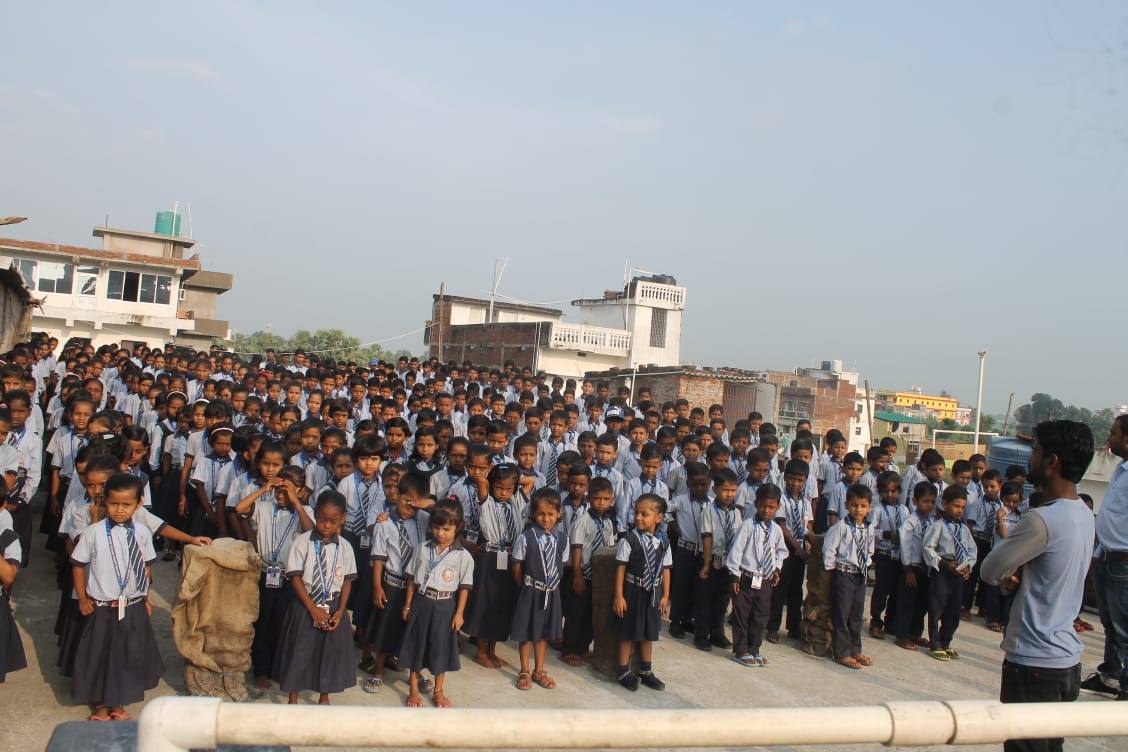 On the 12th of October 2019, you landed in Bodhgaya, can you describe your arrival and the first days there?

When we arrived, Jitendra was waiting for us with this magnificent smile, it was an extraordinary moment, we hugged each other directly, I felt a warmth in my heart, it was magic, I felt like I had always known him. It is important to know that Jitendra had learnt French and so the link between us was even easier. In fact, he was the one who did the translation during our classes during our stay. A little later, we were invited to his mother’s house where I met Deepack. This meeting was another joyful moment.

Before leaving, we had spent several hours creating a shiatsu protocol in the prone position, thinking that there would be mattresses there. When we arrived at the school, we were confronted with a completely different reality than the one we had expected, there was no infrastructure to do Shiatsu on the floor. The same evening we had to change the protocol to a chair.

How did you organise your days?

Our days started early. We were picked up at 6:30 in the morning by motorbike, and the three of us would ride through many small villages on a motorbike. One morning I had the fright of my life. We were riding quite fast without helmets on dirt roads with cracks in them and suddenly a pig crossed the road. The driver couldn’t avoid it, but luckily he was able to right the bike, I honestly don’t know how he did it.

When we arrived at the school, we went up to the roof of the school where we prayed with the teachers and more than 300 students aged from 4 to 17. After the prayer, we would take over the morning gym before starting the lessons. We start with a mixture of Do in and Qi gong and end with singing. It was amazing to see all these children and little four year olds following us with such concentration. Afterwards, we took our seats in the central room of the school where we had placed cloths on the floor. All morning we welcomed the children, starting with the older ones.

I took the boys on my side and the girls on the other side were taken care of by my friends. We did a kata (Do in) together against stress, memory, fatigue and self-confidence, which they could use before an exam for example. With the younger children, we played games and sang songs and made music with timpani and Tibetan bowls.

In the afternoon, we taught the teachers a chair kata that they could then reproduce on the students. This kata, derived from the protocol used in Brussels, started with the head, sky windows, neck, back and ended with the arms and hands, incorporating some important points considered useful for the good balance of the children.

Our days ended at 5pm. We would go home and continue working on the kata/ do in for the next day. The working days were intense, with an average of 12 hours per day. It was very tiring but we were happy and full of energy, looking forward to seeing the smiling faces of all those children the next day. 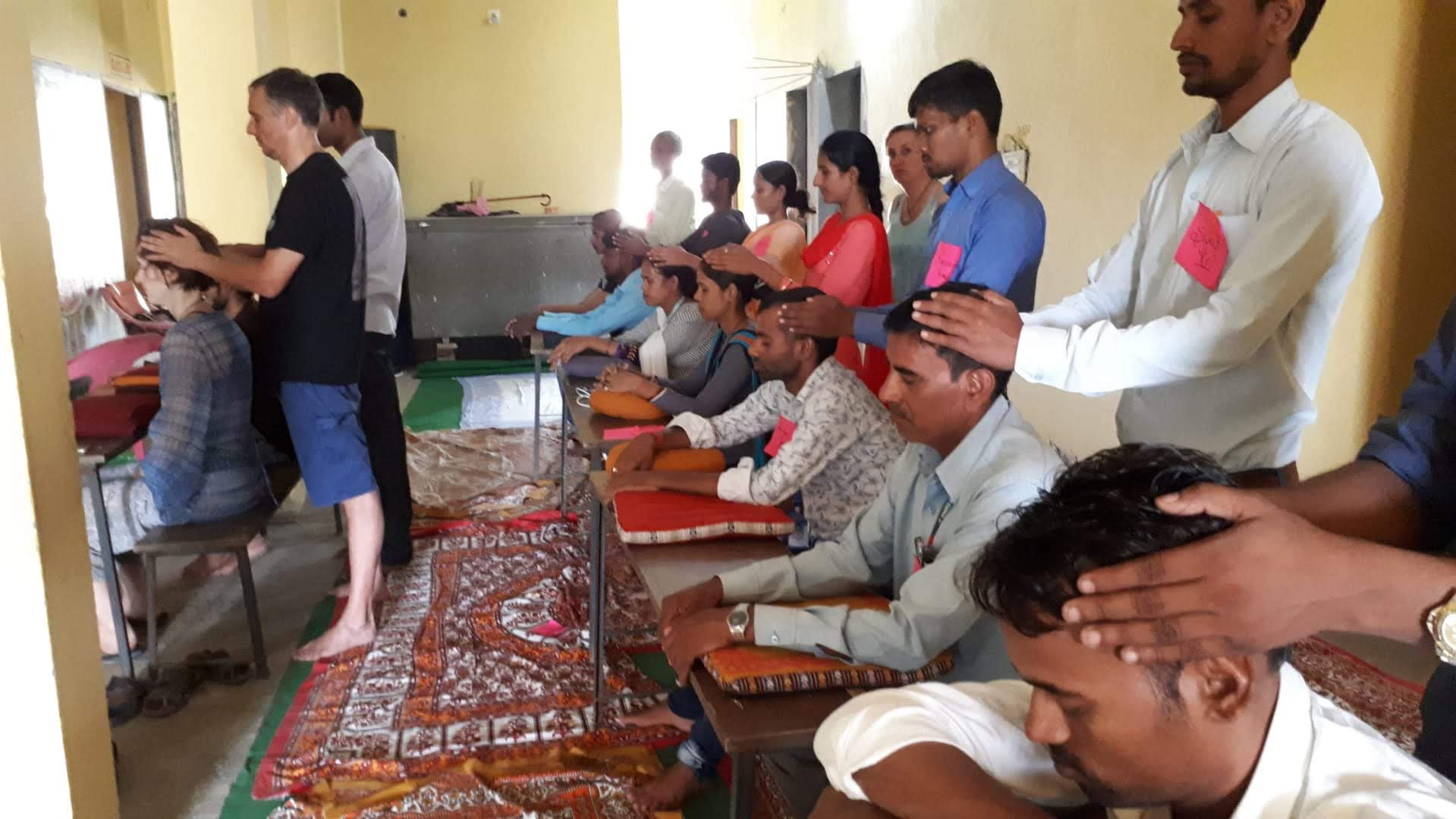 All in all, this humanitarian shiatsu mission was a very enriching experience for you from a human point of view. Do you have an anecdote?

It was one of the most beautiful trips I have ever done! There were so many emotions and joys in working with all these children. It was an unimaginable experience. In fact, when we left, we were in the middle of the world at the airport with tears flowing down our faces that would not stop.

During the whole stay, some teachers came to get us at four in the morning to do yoga, but as I didn’t want to get up, I invented Sleepy yoga, which made them laugh.

Do you have any advice for people who want to start a humanitarian Shiatsu mission?

If you have the opportunity to do a mission like I did or if an opportunity comes up, go for it! It is so enriching on a personal and human level. I can only advise you to find out about the infrastructure (sinks, premises, mattresses, water etc.) before preparing your project.

Thank you very much Marc for this interview and for your advice!

Do you also want to support the Shanti India school in Bodghaya? A simple click is enough! 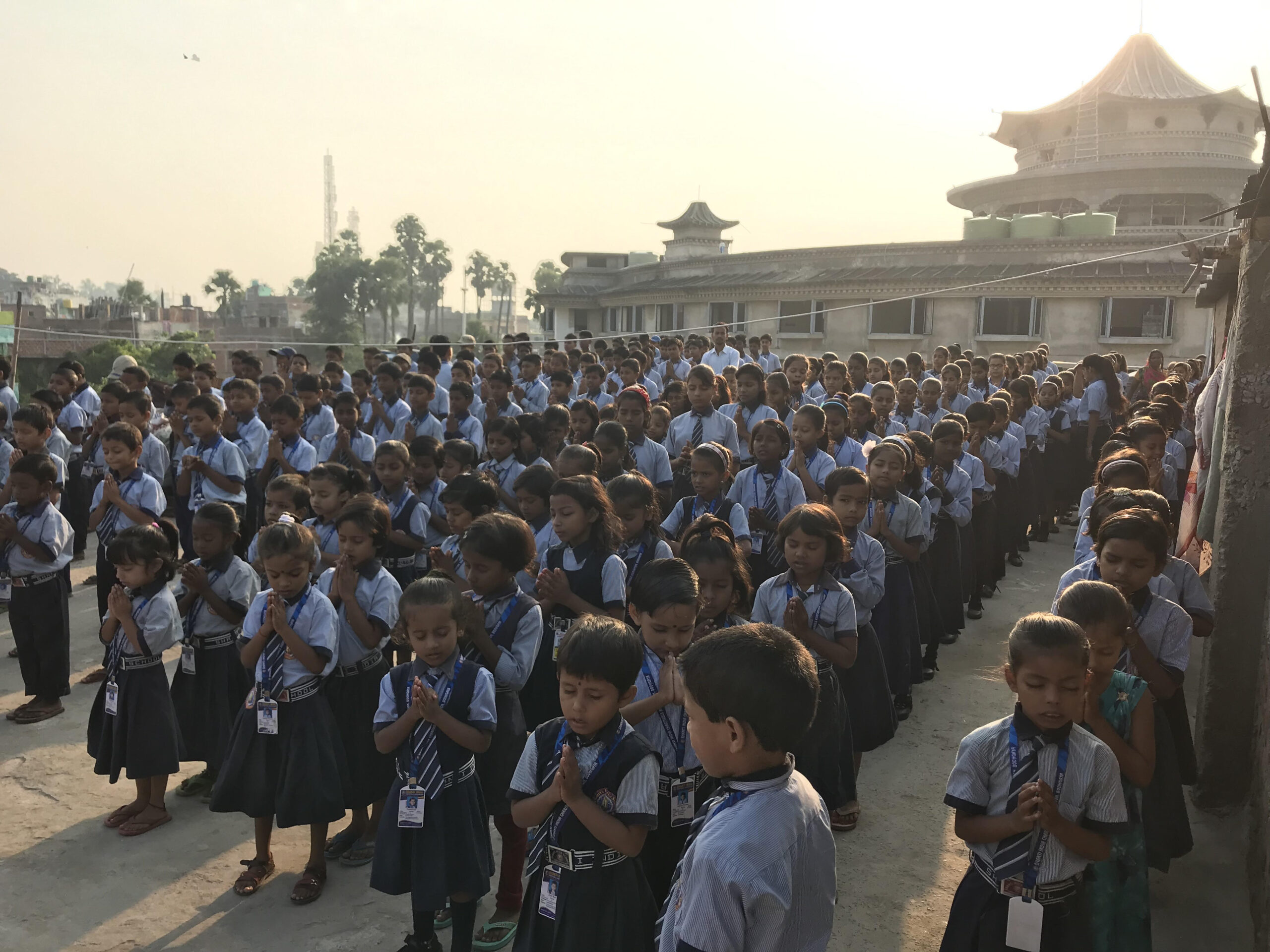 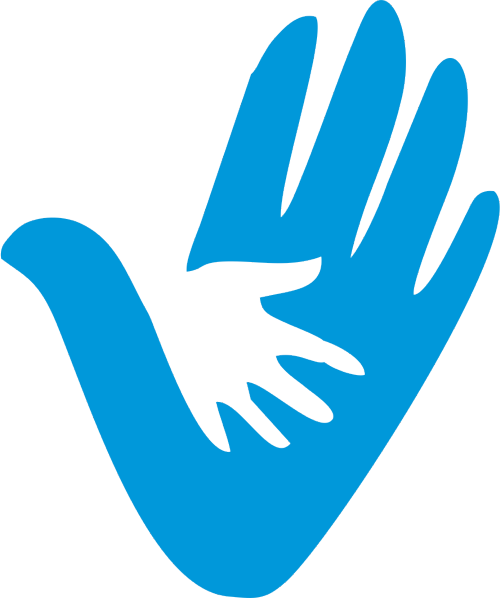